Everything You Need To Know About Solar Panel Disposal

At the end of their life, solar panels are a treasure trove of recyclable materials and rare elements. Done properly, recycling can save up to 96% of aluminum, glass, and semiconductor elements. 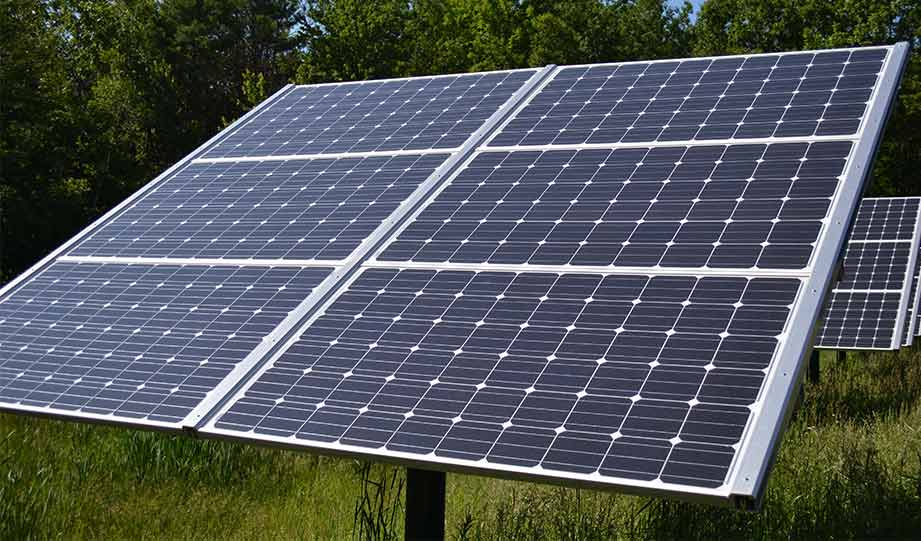 A report published by the International Renewable Energy Agency (IRENA) reveals that by 2050 about 60% of our electricity will be provided by solar and wind.

With the price of rooftop systems coming down, more and more businesses and homes choose to go green and trim their monthly bills with emission-free solar energy.

The report also calls to action: If we start recycling solar panels at the end of their average 30-year service life then by 2050 we could salvage about 78 million tonnes of raw materials and other valuable components.

That means we should start disposing of them in the right way.

Can Solar Panels Be Recycled?

Yes, solar panels can be recycled. There are recycling technologies that achieve even 96% recycling efficiency, and the number is likely to grow even higher in the future.

However, there are different recycling procedures for different types of solar panels.

There are two main types of panels in use today: crystalline silicon and thin-film.

The common thing about both types of solar panels is that they are made of elements that can be recycled in mass quantities.

Metal, glass, and wiring can be recycled and reused completely.

Although you can’t simply break down silicon wafers and recycle them like glass, some solar panels recycling companies melt them at high temperatures and reclaim silicon along with precious metals.

Other companies are developing their own proprietary processes for reclaiming silicon and precious metals from solar cells.

That’s good news for all of us, and you’ll see why below.

Where To Recycle Solar Panels 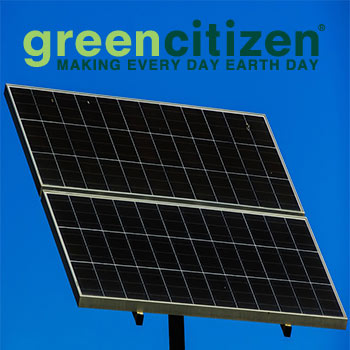 If you’re in the San Francisco Bay Area, you can recycle your solar panels with us at GreenCitizen by dropping them off at our Burlingame Eco Center.

Just make sure they are intact, non-broken panels since we can’t accept panels that don’t meet those criteria.

If you’re outside the Bay area, you can easily use our Green Directory to find a recycler closest to you.

How To Recycle Solar Panels

Sadly, the US has no solar recycling regulations, with the exception of state law in Washington. New York State is proposing a regulation that would oblige the manufacturers to finance the collection and recycling program for solar products.

We globally produce about 250,000 metric tons (more than 550 million lbs) of solar panel waste a year. By 2050, the amount will grow to six million metric tons.

Recycling efforts by the solar industry itself are also limited.

The good news is, once they've been identified as universal waste, the state will then be able to promote the collection and recycling of solar modules and ease the regulations on retail stores and other businesses that wish to collect PV waste.

Keep in mind though that different types of solar modules call for different recycling approaches.

Step 1: The solar panel recycling process for crystalline silicon products starts with taking apart the actual product to separate aluminum and glass. About 95% of glass can be reused. 100% of metal can also be reused for new frames.

Step 2: One way to loosen the binding between the cell elements is to heat them up to 500°C (932°F). During this process, the heat evaporates the encapsulating plastic, releasing the silicon cells. Other companies are researching much more energy-efficient technologies that achieve the same thing but also reduce the cost of recycling operations.

Step 3: Not even the encapsulating plastic goes to waste, as it becomes a heat source for the next stages of recycling.

Step 4: The remaining silicon wafers are etched away with acid or alkaline solution. Broken silicon particles are used again for making new silicon modules, with an 85% recovery rate.

Step 1: The panels go into a shredder followed by a hammermill that produces particles 4-5mm particles. At this size, the lamination that keeps the inside layers sandwiched together breaks, so they can be separated. If the panel comes with the aluminum framing, the framing is removed before this step, allowing the aluminum to be reclaimed.

Step 2: Unlike with silicon-based PV panels, the remaining elements are in both solid and liquid form, so a rotating screw is used to move the solid parts to the next stage of recycling, while the liquid drips into a container below.

Step 3: The liquid component goes to metal processing that finally separates different semiconductor materials. About 95% of semiconductor components can be salvaged this way.

Step 4: The solid components are contaminated with interlayer elements that are lighter in mass, which are removed using a vibrating surface. What remains after the final rinsing is pure glass. About 90% of glass is saved in this recycling process.

Why Should We Recycle Solar Panels?

We should recycle solar panels because although photovoltaic (PV) modules generate zero waste while operating, they will become e-waste at the end of their lifespan at about 25 to 40 years.

This is why we need to develop waste management strategies for solar PV waste before it becomes a problem.

How Much Waste Comes From Solar Panels?

A recent report from IRENA revealed that we globally produce about 250,000 metric tons (more than 550 million lbs) of solar panel waste a year. The same report predicts that by 2050, the amount will grow to six million metric tons of new solar waste a year. [2] 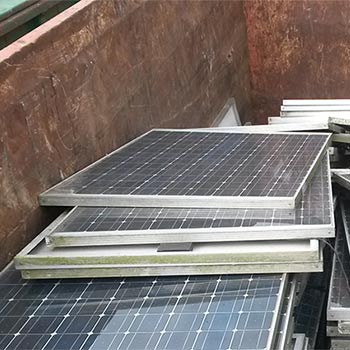 Although California holds almost half of the U.S. solar energy capacity, no regulatory or legislative action for solar waste currently exists in the state, despite hazardous substances that are used in both crystalline silicon and thin-film modules.

The IRENA report for 2020 expects that California will have to deal with over 13,000 tons of solar waste by the end of the year.

A study by Lee-Tan Lu from the Environmental Studies department of San Jose University estimates that by 2045 there will be about 400 thousand tons of PV waste in California, with 100,000 tons in the San Francisco Bay Area alone. [3] Yikes.

Why Shouldn’t Solar Panels Go To The Landfill?

Solar panels shouldn’t go to the landfill because it would be a great loss of valuable materials.

Like many other forms of e-waste, some types of solar PV modules also contain lead, cadmium, and other toxic metals and polymers that are impossible to remove without breaking the whole panel apart. 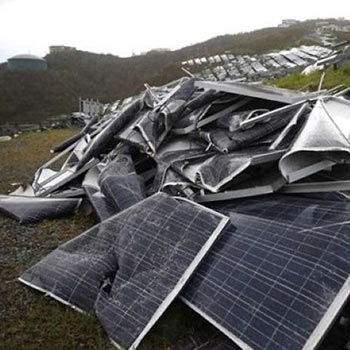 If they are allowed to leak into the environment, these hazardous components can cause significant pollution and health issues.

To fully close the energy circle, we need to safely dispose of and recycle PV modules that reach their end of life.

What Are The Benefits Of Recycling Solar Panels?

Apart from environmental issues, recycling solar panels is important for the economy too. By salvaging solar modules and their components, we support a circular economy of PV modules.

Such a closed-loop system directs waste back into the material flow, minimizing the input of raw materials. The circular economy concept strives to keep products, equipment, and infrastructure in longer use, this way improving their productivity.

We have the capacity to recycle 2 million panels globally on an annual basis. As more panels start reaching the end of their 25-year lifetimes, recycling will increase drastically.

For example, rooftop solar modules that have lost some of their efficiency can be repurposed to power an off-grid cabin with renewable energy.

I’ll go into more detail below on why the recycling of solar panels is beneficial for all of us.

Secures The Supply Of Rare Metals 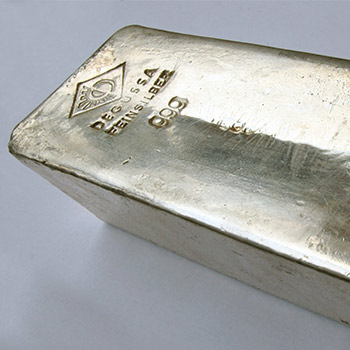 If we can recover these materials, we can conserve the limited reserves available on earth and continue to use them in the solar industry.

For example, silver unlocked from PV panels has considerable potential value. It’s estimated that by 2030, about 90 metric tons of silver will be recovered from solar systems worldwide.

At a current market price, that amount is enough to produce 50 million new PV panels.

Reduces The Extraction Of Raw Materials

Although glass, aluminum, and copper aren’t as rare as elements used for semiconductor layers, they have high embodied energy value.

This means that the extraction of raw materials and the associated industries both require a lot of energy and produce significant emissions.

With today’s recycling technology we can reuse almost 95% of the glass from solar modules, while all aluminum parts can be used for the manufacture of new cell frames. [4] We can also reuse copper wiring for junction box cabling in new modules.

Ninety-five per cent is an exceptional recycling figure, especially for a multi-component product. Only soda cans can claim to do better but they don’t reach 100% either.

Recycling solar modules at their end of life will also give way to new industries that could create considerable economic value.

These industries associated with PV recycling can, in return, create job opportunities in both the public and private sectors. 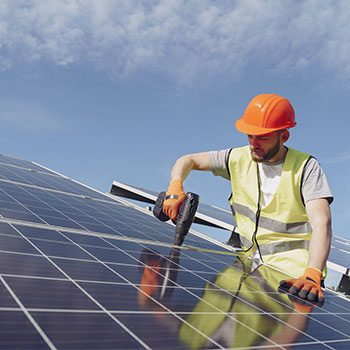 Are old solar panels worth anything?

Yes, even old solar panels are worth recycling. They contain rare metals like silver, indium, and tellurium that can be salvaged, as well as aluminum, copper, and glass that can be recycled and reused in new manufacturing.

How do I get rid of old solar panels?

You can get rid of old solar panels by selling them, giving them away, finding a scrap dealer who will take them, or paying for them to be recycled. After 30 years of service life, their power rating may not be enough for your home, but someone can still use them to charge an e-bike.

What happens to solar panels when they die?

When solar panels end their service life, with a little luck, they become photovoltaic (PV) waste which can be recycled. Silicon-based modules consist of about 76% glass, 10% plastic, 8% aluminum, 5% silicon, and 1% rare metals. Current technologies reach 96% of recycling efficiency.

What happens to solar panels after 25 years?

After 25 years, the efficiency of solar panels inevitably drops. If you maintain them properly, they may still work after 25 and even 30 years. However, if the output voltage drops way too low to power up the inverter, your panel has reached its end of life and needs to be recycled.

Taking your old solar panel to a landfill is a bad decision.

If toxic elements the solar panel contains are washed away, they can become both environmental and health hazards.

By dumping the panel, you are also dumping perfectly recyclable materials such as glass, aluminum, and copper, as well as rare elements like indium, silver, and tellurium, that can be salvaged and reused in new manufacture.

If it has reached its end of life, make the green choice, and drop off your intact solar panel at GreenCitizen's Burlingame Eco Center.

Do you guys have used panels for sale