Is Styrofoam Recyclable? The Answer’s Not That Simple 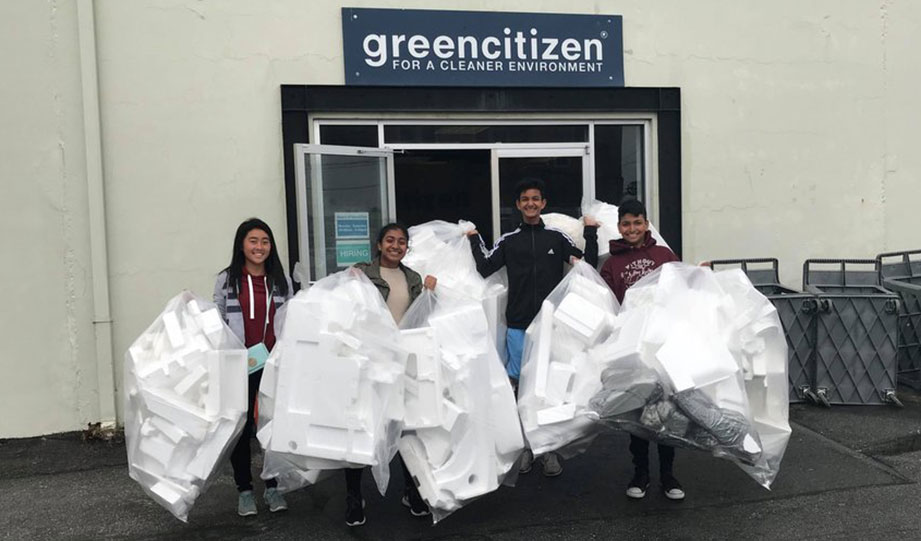 It’s estimated that Styrofoam can take up to 30% of the space in US landfills, with Americans alone throwing away 25 billion foam cups every year.

From food containers to cups and packaging, this material is omnipresent in our lives, yet it can be dangerous for both our health and the environment.

So the question is: can Styrofoam be recycled?

Can You Recycle Styrofoam?

Yes, you can recycle Styrofoam, but it can be difficult.

In fact, it's one of the hardest materials to recycle besides VHS tapes and cassette tapes.

One reason why it's difficult to recycle is because it biodegrades slowly and shows significant resistance to photolysis, or decomposition by the action of light. [1] It can take up to 500 years for it to decompose naturally due to that.

So what you can do is try to reuse it by giving it to retailers or couriers who accept packing peanuts or packing popcorn that they can use as shipping materials. 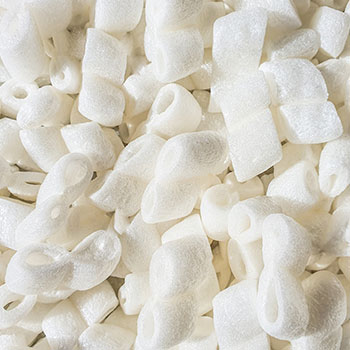 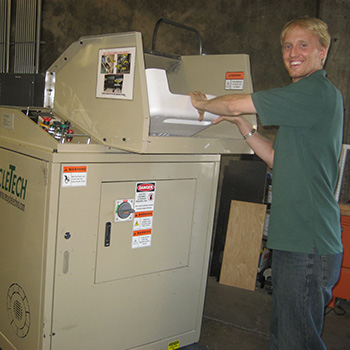 Or, whenever possible, take reusable food containers (like these glass food storage containers with eco-friendly bamboo lids) to restaurants instead or avoid using polystyrene containers altogether.

Another reason why Styrofoam is difficult to recycle is because it’s a number 6 plastic, which means that it requires specialized equipment to be broken down successfully.

Another option is to bring it to recycling facilities. Take note though that they won't accept it if it has been contaminated by food or drink because that will make it impossible to recycle.

Most recycling centers won't even accept it at all (even if it's uncontaminated) because it's too bulky, which means that it's not cost-effective for them.

GreenCitizen, on the other hand, accepts Styrofoam for recycling because we have our own condensing machine that can reduce it to roughly 1/90th of its original volume.

How To Recycle Styrofoam

First, gather up your old but white, clean, and unmarked Styrofoam and come down to GreenCitizen’s Burlingame EcoCenter where we have a handy condensing machine.

If you don’t have time to drop it off, you may also try our pick up service. 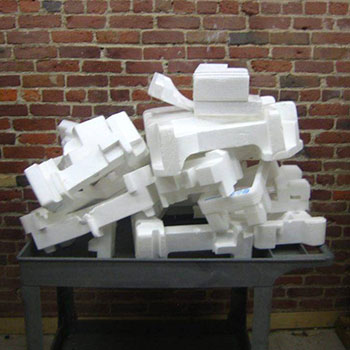 We’ll feed the white, unsoiled blocks of Styrofoam into the machine. This reduces them to roughly 1/90th of their original volume and spits them out like frozen yogurt. 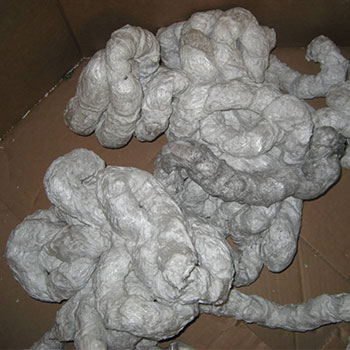 We can then use the condensed polystyrene foam to make insulation sheets, construction materials, or ceiling molding.

They can also be transformed into surfboards, cameras, jewelry cases, coat hangers, public benches, pots, toys, or picture frames. The possibilities are endless.

As you can see, it’s so much better to repurpose it into something useful instead of letting it sit around as waste.

[EPS] doesn’t biodegrade, it just breaks down, and as it breaks down it just becomes edible to more things and it just leads further down the food chain.

Where To Recycle Styrofoam 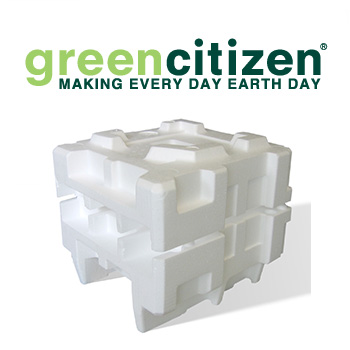 If you’re in the San Francisco Bay Area, GreenCitizen is open for drop off recycling from Monday to Friday, 10am until 6pm.

We can also organize pickup recycling services if you’re a business with a large amount of Styrofoam to recycle.

Keep in mind that we can only recycle those that are white, clean, and unmarked. Unfortunately, we can't accept food containers for recycling since they've already been contaminated with oil and other food waste.

If you’re not in the Bay Area, then our Green Directory should help you find the nearest recycling center to you that accepts this material.

The Environmental Protection Agency (EPA) has classified styrene, the material that makes up Styrofoam, as a possible human carcinogen.

Styrofoam is technically the trademarked closed-cell extruded polystyrene foam (XPS) produced by the Dow Chemical Company and introduced to the US market in 1954.

However, the word “Styrofoam” also informally refers to various polystyrene foam products (like how we use the word “Kleenex” to refer to all brands of tissues). 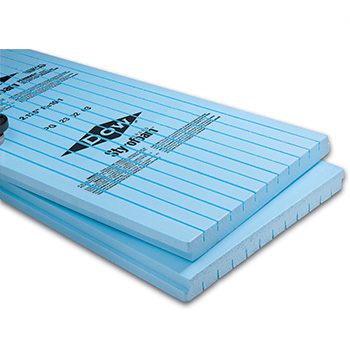 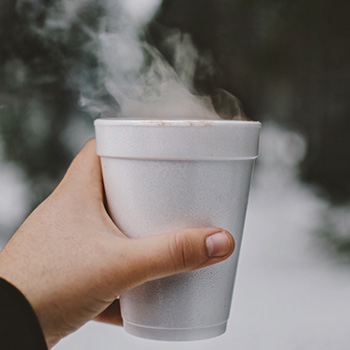 But what about the white, rigid, crunchy stuff we use for our craft projects?

We’ve become so used to calling it Styrofoam, but it’s actually expanded polystyrene foam or EPS.

This is the one that’s commonly found in takeaway food containers, coffee cups, and packing peanuts.

Is Styrofoam Bad For The Environment?

Yes, Styrofoam is bad for the environment. Here’s why:

Now that you know how dangerous it can be for the environment, we hope that you'll consider replacing your Styrofoam-based products with more eco-friendly, reusable products instead.

If you're a coffee drinker, you can replace your single-use cup with the Neon Kactus Reusable Glass Coffee Cup.

This is because it uses fully recyclable and sustainable materials.

The company's goal is to help divert millions of disposable products from the landfill every year, which is why we like using their products.

Another good thing about Neon Kaktus is that unlike other brands, it actually delivers good on its promise to prevent leaks and spills with its coffee cup (as many reviewers can attest), because really, who wants coffee all over their shirt? 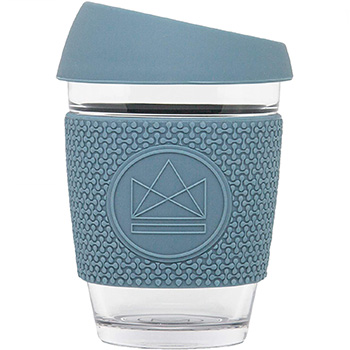 Another reusable coffee cup that we like is the Panda Cup Eco Friendly Reusable Coffee Cup because of how much it looks like your typical Starbucks cup... but without the guilt.

If you eat a lot of take-out, then you should use these stainless steel Food Storage Containers from JaceBox.

They're airtight and leak-proof so you won't have to worry about your favorite food spilling on the pavement.

This isn't something we can say about Styrofoam take-out containers, to be honest.

Best of all, the company promises that these containers are virtually indestructible. Since they're made from 18/18 grade stainless steel, they won't warp like plastic ones, or break like glass ones. 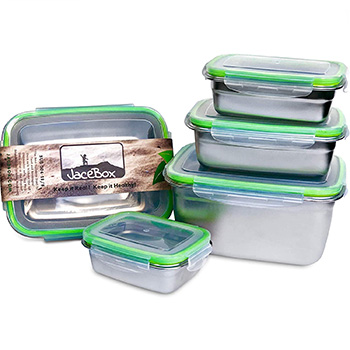 This means that they're not likely to find their way to our landfills anytime soon.

If you travel a lot and would prefer something that's less bulky, these collapsible Silicone Food Storage Containers from Collapse-it would make for a great replacement to single-use food containers.

The company claims that, since they're made primarily of inert silicone and oxygen, they're better for both your health and the environment.

Can you put Styrofoam in the recycling bin?

Yes, you can put Styrofoam in the recycling bin in some areas. However, there are many local governments who do not accept it in their curbside recycling programs.

How do you dispose of large Styrofoam?

You can dispose of large Styrofoam at a dedicated recycling center like GreenCitizen where we compress it down to 1/90th of its original size.

How do you recycle Styrofoam at home?

You can recycle Styrofoam at home if there is a curbside recycling program in your area that allows you to put it in the recycling bin. You may also donate it to delivery persons that come to your door since they might be able to repurpose it as packing peanuts.

What can you do with old Styrofoam?

You can help turn old Styrofoam into many everyday items including surfboards, ceiling molding, and coat hangers if you recycle it at a dedicated center.

How do you destroy Styrofoam?

You can destroy Styrofoam by dissolving it with acetone, but be warned that it’s dangerous from a health and environmental standpoint because doing so can release toxic carcinogens into the air.

Can Styrofoam egg cartons be recycled?

Yes, Styrofoam egg cartons can be recycled if you take them to a specialized recycling center like GreenCitizen. In some cases, you can put them in a recycling bin but only if your local government has a curbside recycling program.

No, vinegar will not dissolve Styrofoam because vinegar is not hot nor concentrated enough.

What will dissolve Styrofoam?

Acetone will dissolve Styrofoam, though it’s still not ideal for the environment and it becomes difficult if you’ve got a lot to dispose of.

So, is Styrofoam recyclable?

Yes, it is recyclable, but the market for it is very small and very niche that your usual curbside recycling program doesn't often offer services for it.

We at GreenCitizen though can make Styrofoam recycling as cheap and as convenient for you as possible.

If you don’t want to pollute the Earth for 500 years or more, it will do good for you to reuse or recycle it today. Drop it off at our EcoCenter in Burlingame if you're in San Francisco, or have it picked up by us.

5 Comments on “Is Styrofoam Recyclable? The Answer’s Not That Simple”

I’ve been looking into recycling Styrofoam in my country and as well the concern of recycling in general. I have great hope that recycling can become a norm in our lives once we put it into practice the right way.
I wish someone can see my comment and privately email me please. I would love to get your assistance and acquire collaboration with this company. Much love and appreciation!

They always invent new things that can’t be recycled .