Titan Solar Generator Review: Is It Worth Buying? (2020) 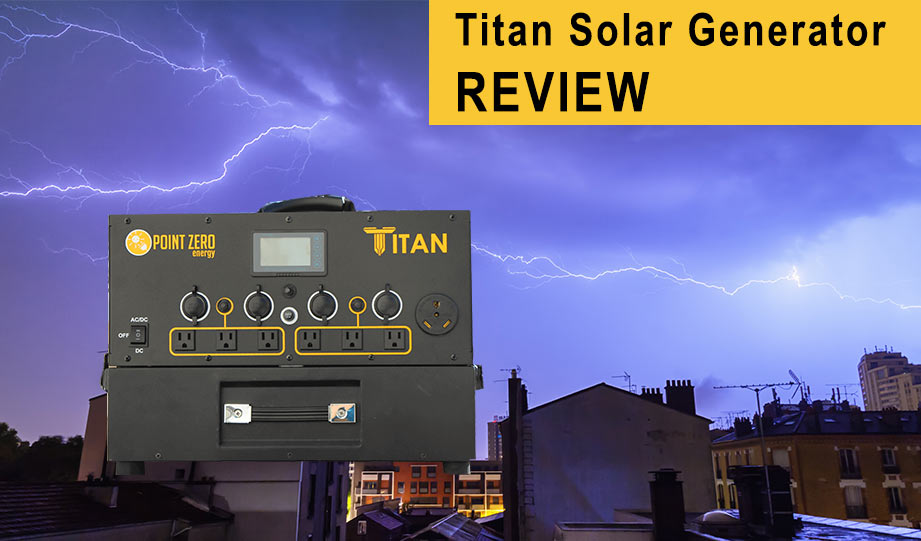 I live in an area that’s had a lot of power outages recently, so I’ve become more and more interested in preparedness.

Now, I’m not a “the end is nigh” doomsday kind of person, but sometimes in bad weather the lights go out and you need a backup solar generator if you want the food in your fridge to stay good.

However, I don’t always find a solar generator that ticks all my boxes — things were too heavy, too large, or had too little battery capacity for my needs.

With this in mind, I decided to give the Titan Solar Generator a try.

Things To Consider Before Buying A Portable Solar Generator

Solar generators are great, but they’re not for everyone. [1] Regardless of which brand you choose, here are some things to keep in mind before buying a solar generator.

How much power capacity do you actually need? If you’re looking to keep your home’s fridge, TV, and other large appliances running for more than 24 hours without grid power, then you’re going to need solar generators with huge capacities.

On the other hand, if you just want to power your smartphones and flashlights to get you through an emergency situation, you can afford to look for much smaller portable solar generators.

Some solar generators have tons of inputs and outputs, which is great. [3]

However, if you’re only looking to power your TV and your smartphone during a blackout, you don’t need 6 AC outlets and 4 DC outlets — it’s a waste of cash.

While being prepared for power outages is wise, you need to weigh up the cost of your investment.

If you’re buying an almost $3,000 solar generator to save $100 worth of food, it’s not very cost-effective.

What is the Titan Solar Generator?

The Titan Solar Generator is a large solar generator that can be charged in around 4 hours via solar power, AC outlet, DC outlet, or a 24V battery expansion.

This gives it many different options for charging, and you can also charge it via multiple different inputs simultaneously, speeding up the charging process.

However, the most striking feature of the Titan is its stackable lithium-ion batteries. [4] 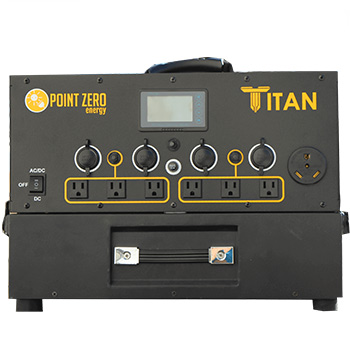 Yes, the Titan allows you to literally stack as many lithium-ion batteries as you want on top of each other to continually increase its overall battery capacity.

While you could technically stack dozens, experts in the industry recommend you don’t do any more than 6 at once.

This is a very large solar generator — it’s called “Titan” for a reason.

The Titan is best suited as a backup power solution for a home — I wouldn’t recommend that you take it camping. Even with just one battery attached, this thing already weighs a whopping 66 lbs. It’s not the kind of thing you can carry around easily.

Due in part to its large size, the Titan has many features to boast, including:

The 3000 watt pure sine wave inverter and the 6 110V AC outlets make the Titan a decent way to power larger appliances in your house.

How Big Is The Titan Solar Generator?

The Titan Solar Generator is very, very large. With just a single battery and the unit itself, the weight is 66 lbs.

Every time you stack on additional batteries, you can add 35 lb on for each battery. It quickly becomes 100+ lbs if you’re not careful.

How Much Solar Can You Add To The Titan?

The MPPT charge controller allows this product to charge via solar panels thanks to 2 solar panels input slots that can handle up to 2000 watts at once, allowing for very fast charging.

If you’ve got a lot of solar panels at home, then this product is ideal.

What Can The Titan Generator Power? 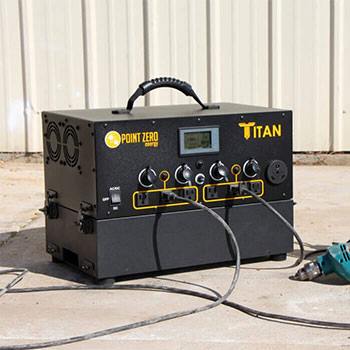 For each battery, this thing can run:

Bear in mind that this is per battery, so if you add on a second battery, you can basically double all of those times.

You can realistically add up to 5 or 6.

How Much Does The Titan Solar Generator Cost?

The Titan has very good solar charging capabilities, so you may want to buy one if you have a bunch of solar panels at the ready. Charging this product with solar power is just one of many ways that you can reduce your carbon footprint and help the environment.

According to the manufacturers, the Titan can last up to 10 years with 2,000 lifetime cycles, so there are plenty of opportunities to make good use of your solar panels.

Who needs one battery when you can have a whole stack of them?

Yes, the Titan allows you to stack as many batteries as you want on top of each other, increasing the power capacity every time.

However, each battery weighs a whopping 35 lbs. Once you’ve got the Titan and 2 batteries stacked, this thing weighs over 100 lbs. 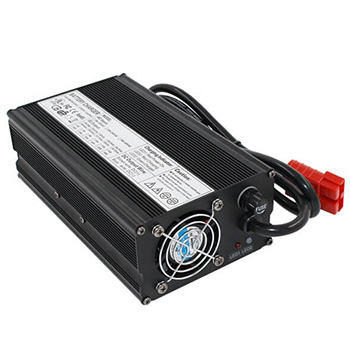 When you’ve got a solar generator with this much power output potential, it’s no surprise that it needs a ton of cooling and ventilation. The Titan has special fans to pull air in and push air out, keeping the product nice and cool.

Of course, the downside to this is noise. I had this running my fridge during a blackout recently and I couldn’t stand to be in the same room as it.

See our Green Store for more products like this.

Now while the Titan Solar Generator is one of the better solar generators I’ve used in my time, it wouldn’t be my first recommendation. Here are some of the negative aspects of the Titan solar generator.

The Titan itself weighs 31lbs, but then with a single battery added on, it weighs 66 lbs.

Now the whole selling point of the Titan is that you can stack multiple batteries on top of each other to increase the power capacity exponentially. That’s great and all, but it starts to get very friggin’ heavy very quickly because each battery weighs 35 lbs.

Experts recommend that the maximum amount you should connect at once is 6. Here’s how heavy the whole unit would be for each additional battery:

To be clear, 241 lbs is about 50 lbs heavier than my own bodyweight. If you plan on moving that around anywhere, you’re gonna need the help of either a trolley or a bunch of people.

God help you if you have to move it downstairs to get to your kitchen.

The Titan is one of the most expensive solar generators you can buy — costing almost $3,000 USD.

If you’re a serious prepper, you might not mind spending this kind of money on one of these generators. However, for most of us, that’s just overkill.

If you’re buying one of these to save the food in your fridge or freezer when your power goes out, is it really worth 3 grand to let maybe $80 worth of food go bad?

Not in my opinion.

The Titan is also one of the noisiest solar power generators I’ve come across due to its loud fans and ventilation system that is constantly circulating air.

Noise might not be an issue for you if you’re using this as backup power, but I personally found the noise very irritating. When I’m dealing with the aftermath of a blackout and I’m stressed out, I need as few irritating noises around me as possible.

I’m trying to run a couple of things in my house, not produce Coachella.

Yes, it’s ultra-convenient to have so many inputs and outputs on a solar generator, but it just starts to feel like overkill.

For me, I’d rather they get rid of a few slots and make the whole thing smaller.

I have my opinions, but I’m just one person looking for a product to fit my needs. I’ve taken quotes from other people’s Titan reviews to give you an impression of other people’s thoughts on the Titan.

The Titan from Point Zero might be the most versatile portable solar generator on the market! Built with extremely efficient and high-quality components, the Titan provides reliable solar backup power for any situation.

Perhaps I’m incorrect, but two features are missing from the prototypes: 1) No dual Titans for 240V. Will there be an upgrade path or will early adopters be stuck with this version? 2) The wall charger is no longer built-in but takes up a solar array connection? Potentially a great product, but you are giving me pause.

Overall, no other product has the amazing and efficient features that the Titan offers. You can enjoy your Titan system every time with the assurance of having it charged. This simply means you can use it 24 hours a day if you correctly measure your input and output of power.

Can a solar generator power a house?

A solar generator with enough capacity can power the main appliances in a house such as a fridge and television. However, you need very large generators to power a home for longer than a few hours.

What is the largest solar generator?

The Titan is currently the largest solar generator on the market, able to charge at up to 2,000 watts speed with solar panels.

How do I charge my solar battery with a generator?

You can use a gas generator to charge your solar battery when your solar panels aren’t generating enough power to meet your demand.

Simply turn on the gas generator and connect it to the input on the solar battery as you would an AC charger.

How long do I need to run a generator to charge RV batteries?

This varies massively according to the size of the generator and the RV, but you can expect it to take at least 10-12 hours to get a typical RV battery charged with a generator.

Titan Solar Generator: Should You Buy It?

While the Titan has its advantages in terms of durability and sheer size, it's such an impractical battery that it’s hard for me to recommend.

If you’re just trying to get your home through a power cut, you simply don’t need this much power.

Instead, I’d recommend the Jackery Explorer 500. It’s a hell of a lot cheaper than the Titan and will still help you to power your smartphones and laptops during a power cut.

It even has a low-power built-in LED flashlight which makes it ideal for blackouts.

If that doesn’t sound like enough power for you, you could try the Jackery Explorer 1000 instead.

Both Jackerys are actually portable and easy to carry around, complete with a sensible number of inputs and outputs for what you’d need in a power outage situation. 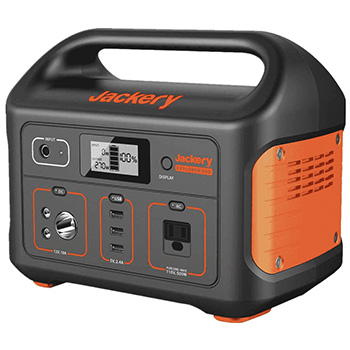 The Titan is just way too much and way too heavy — the Jackery generators are way more practical, especially when the lights go out and you’ve got to lug them around.