Solar Batteries Buyers’ Guide: What To Look For? 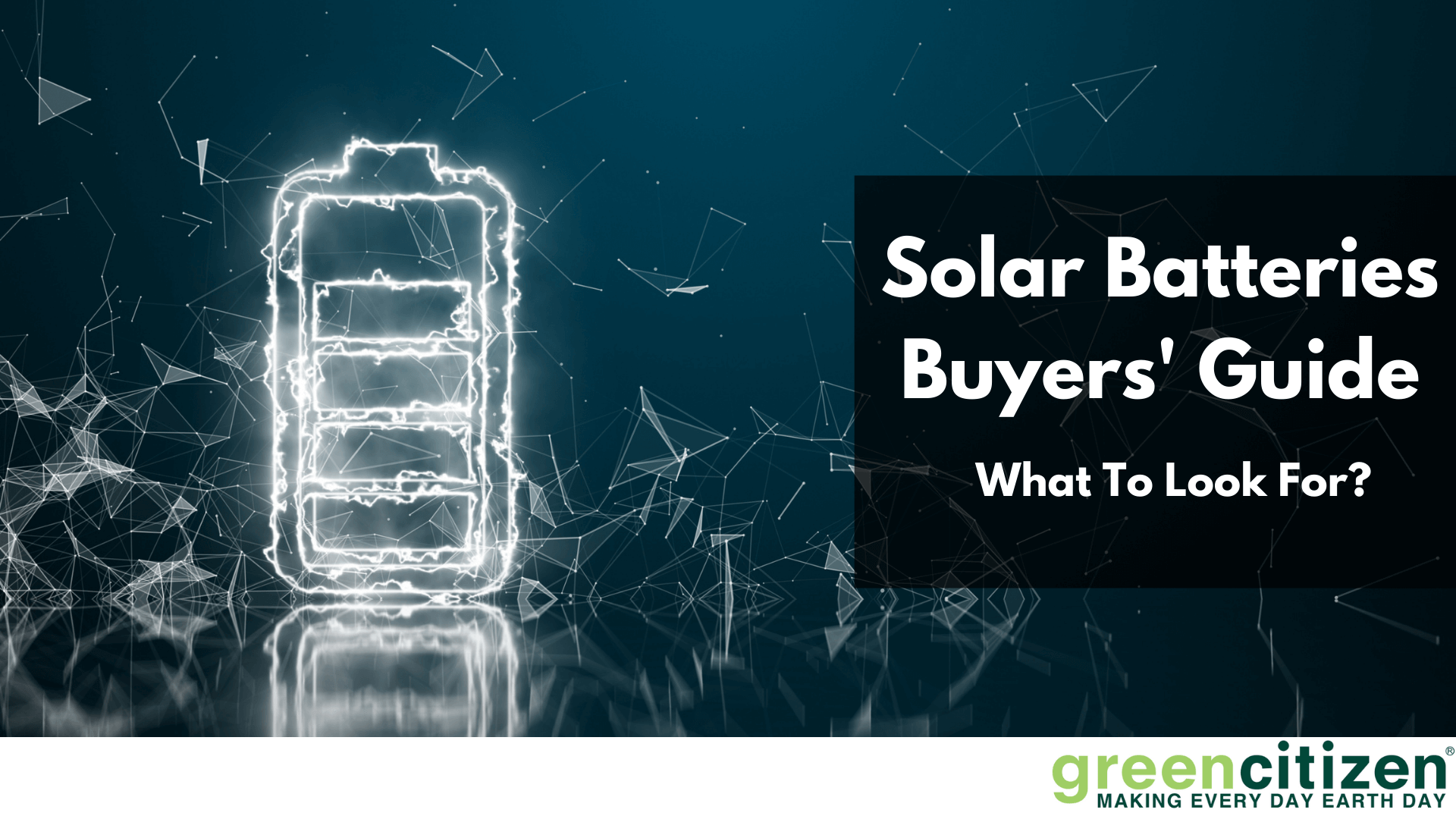 I was ecstatic when I installed solar panels on my home. I was sure my environmental footprint would be lowered, as well as my monthly bills.

So, when my solar panels stopped working only a few weeks after I got them, I was not happy, to put it mildly.

Soon, I found out it was because of the faulty batteries. When getting the solar panels, I admit I didn’t give much thought to solar batteries that’ll store the energy they generate.

This proved to be a monumental mistake, which I set out to rectify. I talked with different sellers and spent hours scouring the available solar batteries.

Here’s what you need to know to best your hands on the best solar batteries.

What Are Solar Batteries?

A solar battery is a device that stores energy from a solar system for later use. The panels absorb the sun's energy. This energy is converted to electricity, which goes through an inverter, so your home can use it.

This energy can be used later on, for example, in the evenings when the panels aren’t producing energy anymore. It can also be used at times when the electricity tariff is high to save on the bill.

A solar battery can be used on the grid or as an off-grid system. The solar PV system is usually connected to the grid. In this way, your home can receive electric energy. This is useful if, for some reason, your panels and battery aren’t producing enough energy to meet your demands.

But, if your system produces more energy than you need, this is sent back to the grid, and you get a credit on your electricity bill, which lowers it.

If you want to be off-grid, solar batteries are extremely valuable. Then, you can store the excess energy in the batteries instead of sending them back to the grid. This is a great way to ensure you’re never out of energy. 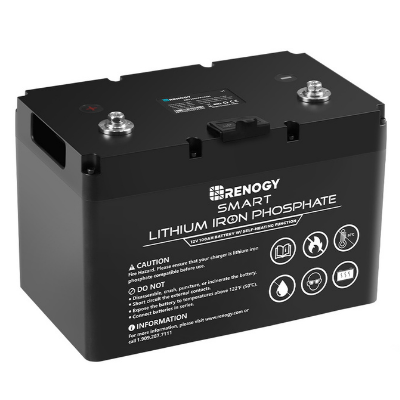 Lithium-ion is the most common type of battery for solar energy storage. These solar batteries have a longer lifespan and depth of discharge compared to other kinds of batteries.

A lithium-ion battery uses lithium manganese oxide or lithium cobalt dioxide as the cathode and graphite (carbon) for the anode.

Lithium-ion batteries are also more compact compared to other battery types. They are usually the size of a washing machine or a small fridge.

They are maintenance-free, and there’s no refilling required.

Many li-ion batteries are green (NOT all of them), as many of them are recyclable and have a long life cycle.

Their main shortfall is that they are the most expensive.

A common Li-ion battery is LiFePO4, also known as LFP sometimes. It has even better discharge efficiency and a longer life span.

You should note that some refer to LiFePO4 as a different battery type when comparing to li-ion batteries.

Lead-acid batteries are some of the cheapest solar batteries found nowadays. However, they are becoming outdated, as they have a shorter lifespan and capacity compared to Li-ion.

They will also cost more in the long run because you’ll have to replace them more frequently.

Charging time depends on several factors, but it can take up to a day or even longer to reach full charge.

They are not very green, as they are toxic, and they can leak.

Flow batteries are a new kind of deep cycle battery in the energy storage sector. They are called flow because they have water-based electrolyte liquid that flows between two changers in the battery.

When these batteries are charged, chemical reactions happen. Due to this, the energy can be stored and then discharged.

These batteries are becoming more and more popular. However, the high cost and large size make them not approachable for residential use.

They have 100% discharge depth and fire retardant liquid inside, which makes them safe to use.

Their lifespan is also very long — up to 30 years, and they’re low maintenance.

They are also a good green option, as they have recyclable components.

Gel batteries are a kind of lead-acid battery. Their main feature is the usage of gel electrolytes instead of liquid acid, which makes them extremely safe.

There’s no risk of gas leakage.

The gel battery has no liquid inside, as the electrolytes are in gel form. The movement of ions creates electricity outside of the battery to power a load. If the gel battery is charged with solar energy, the opposite reaction happens.

It’s maintenance-free — there’s no need to add water. It has a long cycle and shelf life.

AGM stands for Absorbed Glass Mat and it’s another kind of solar battery.

The acid electrolyte is absorbed on a glass mat, which makes this battery leakproof.

It has the same components as the gel battery, and the same working principle — the flow of H+ ions between electrodes produces energy current.

Their main disadvantage is a shorter life cycle, and they can have a higher cost per kWh.

The final type of solar battery is nickel-cadmium (Ni-Cd). Compared to lead-acid and Li-ion, these aren’t as widely used.

Their main benefit is that they are extremely durable, and they can work under extreme temperatures.

However, they are extremely toxic due to cadmium. Cadmium is even banned in some countries, so they’re hard to get rid of.

Buying vs. Leasing Solar Panels: Which Path Should You Take?

Things to Consider While Buying the Best Solar Batteries

Battery capacity is how much energy a battery can store and supply to your home. It’s measured in kilowatt-hours (kWh).

Good solar batteries usually have a capacity of about 5 kWh or more.

However, most batteries nowadays are stackable, which means you can combine their storage capacity and get a higher amount of energy.

Battery capacity tells you how long it can power your home or parts of it.

Battery power rating tells you how much electricity it can provide. This is usually shown in kilowatts (kW).

The power rating essentially tells you how many appliances the battery can power at once, as well as what those appliances are.

The majority of available batteries nowadays have a continuous power output of about 5 kW.

Roundtrip efficiency is a metric that measures the battery’s efficiency during one cycle. It checks how well the storage system, which is made up of a battery and an inverter, converts and stores energy.

Because batteries also need the power to run, they will spend some of the energy they store. Also, some kWh are always lost when direct current is converted to alternating current.

Roundtrip efficiency is the amount of energy you can get back from the battery once it spends the energy it needs.

The battery’s lifetime is measured in three metrics:

For example, a battery with 6,000 life cycles has 17 years of the expected lifespan.

The manufacturers of solar batteries have to meet safety requirements for the battery to be certified and approved for installation.

However, there are nuances.

Some batteries are safer than others.

For example, nickel-cadmium is considered unsafe because it’s toxic.

On the other hand, gel and AGM solar batteries are safe because there’s no, or minimal, risk of leakage.

Chemistry refers to the compound that stores the electricity inside the battery.

On the other hand, Li iron phosphate (LiFePO4 or LFP) batteries don’t use cobalt but phosphate, which is much safer. There aren’t many risks for people or the environment, and it’s also much easier to mine.

These are only the differences between Li-ion batteries.

There are even bigger chemistry differences between Li-ion and lead-acid, and so on. Most of these differences boil down to safety (and have different price points), so it’s a good idea to consider the chemistry before you make a purchase.

Depth of discharge (DoD) is the amount of energy you can get from a battery before it has to be charged again.

DoD affects battery lifespan and efficiency, as this is the energy you can get from a battery before its lifespan is impacted.

The higher DoD the battery has, the more of its total capacity you’ll be able to use.

Be Careful With Price and Warranty

Solar batteries go from around $200 to thousands of dollars. As is the case with many other things, the higher the price, the better the quality.

Also, more affordable batteries are usually less powerful, and you’ll end up upgrading or replacing them, which in the end may even cost more than getting a more expensive battery upfront.

Warranty is related to price, and it guarantees either a number of cycles or the number of years batteries will last for.

Some batteries can have both or a combo.

For example, Sonnen batteries have a warranty of either 10 years or 10,000 cycles, whichever comes first.

Get Familiar With Battery Types

As I mentioned above, solar batteries come in several types. Depending on which battery you get will impact how efficient your solar panels are.

You should think about your needs.

For example, is the battery's capacity or safety your primary concern, and go from there.

How Long Do Most Solar Batteries Last?

Solar batteries last between 5 and 15 years. In general, they will last for a shorter time than the solar power system, so you’ll have to replace them at some point in the future.

How Can I Extend The Lifespan Of My Battery?

You can extend the lifespan of a deep cycle battery by:

How Many Solar Batteries Do I Need?

How Do I Install A Solar Battery?

To install a solar battery to an existing solar system, you should have an inverter ready for installation. If the inverter doesn’t work with your solar battery, you’ll have to get one that does. Usually, a solar or battery storage system supplier will arrange the connection to the network for you and prepare all documentation.

How Many Solar Batteries Do I Need For My Home?

Are Solar Batteries Worth It?

Yes, solar batteries are worth it. They are especially worth it for homeowners who experience frequent power outages or have access to energy storage incentives. They also lower the carbon footprint.

Should You Get a Solar Battery?

My firm vote is yes.

Even better, get solar panels and stop being dependent on the electric grid.

However, make sure to through research about the specifications of the batteries. Sadly, a huge portion of the manufacturers don't share the complete spec list and you end up getting subpar batteries for you "solar lifestyle!"

Also, you should go with a manufacturer with good brand value as unreliable power source might damage your electronic equipment.

Best of luck and if you have any question regarding the solar batteries, let me know in the comments.

← TurboAnt X7 Pro E-Scooter Review (2022): Should You Buy It?
Mushroom Growing Kit: Is it A Good Christmas Gift Idea? →