The Alarming Truth About Biodegradable Balloons 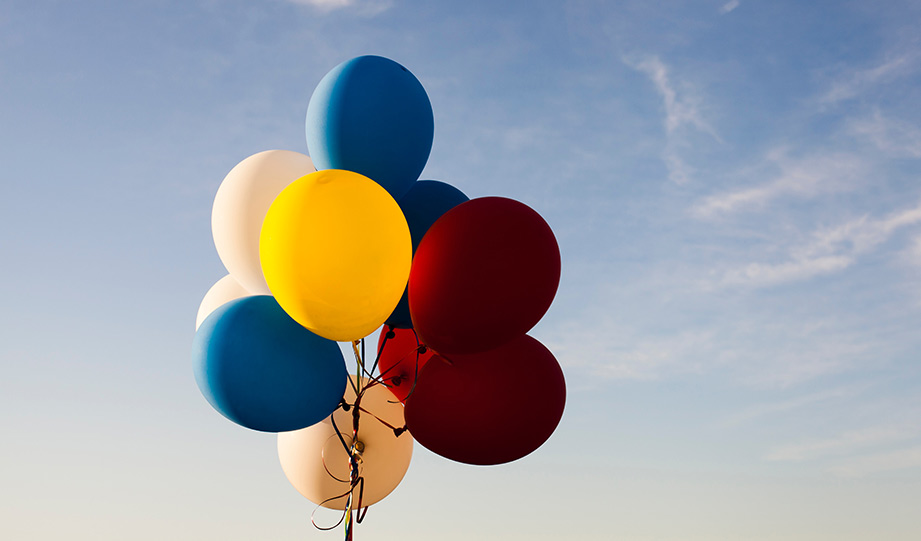 I totally get the idea of party balloons. Kids love them, and they can be quite a sight when community and sporting events release them in large numbers.

But ever since I was a young kid, I’ve always wondered what happens after huge balloon releases.

It seemed clear to me that all that plastic had to come back to earth somehow and what would happen then?

The unfortunate reality is that the balloon industry has lied to the public long enough to make them believe that balloons are environmentally friendly.

Here’s what you need to know to bust that myth.

Are There Biodegradable Balloons?

The only accurate answer to this question is NO, THERE ARE NONE.

And no matter how much you hear people say that these balloons contain only latex (which is a biodegradable material) it’s just a way too simplistic answer.

But let me first give you a little bit of background on why this is so.

In 1989, study sponsored by the balloon industry looked at the effects of balloon releases on the environment.

The conclusion of the study, not surprisingly, was that latex balloons were perfectly safe.

The reason given in the study was that most helium-filled balloons would burst into tiny pieces, and they would biodegrade as fast as an oak leaf.

That sounds nice, but there were some significant flaws in the study, which was never peer-reviewed. 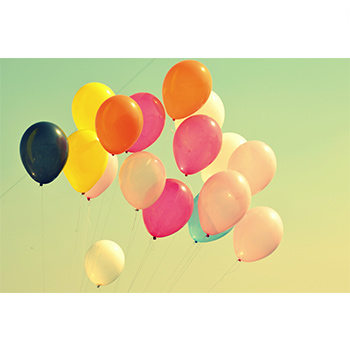 It also didn’t publish the exact methods used to test how they decompose, and some recent tests have shown zero degradation after 16 weeks. This all just seemed too fishy for me.

So, what really happens with biodegradable latex balloons in the environment?

Let’s take a look at an oak leaf first.

It sounds great to highlight that biodegradable latex balloons decompose at the same rate as a leaf. However, that doesn’t highlight the fact that this process could take more than 6 months, depending on the conditions.

Now, an oak leaf poses no danger to animals during those 6 months. But that cannot be said for balloons. 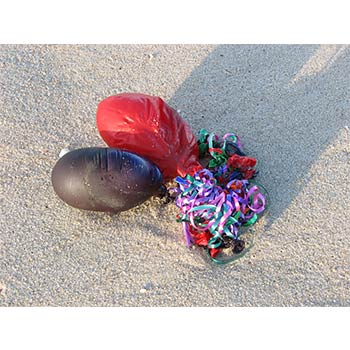 The rubbery texture and elasticity remain in place, making it a choking hazard for many smaller animals.

And larger animals aren’t immune to damage either, whether the balloons remain intact or shatter into tiny pieces.

If the pieces are too small to suffocate an animal, they are still large enough to get stuck in digestive tracts, which essentially means the animal will starve to death.

So, the whole concept of balloons being environmentally friendly is complete greenwashing, and I’ll get into some more details about the degrading time frame shortly.

Can Balloons Be Recycled?

Technically it’s possible to recycle balloons made of synthetic plastics or natural latex.

However, most household waste recycling facilities don’t cater for separating these types of rubbery materials.

So, no matter how much balloon manufacturers and sellers keep saying it, they are not eco-friendly ways to have some fun.

So, there are ways to recycle natural latex and blend it with other synthetic materials. [1] However, this ends up creating even less recyclable stuff called polystyrene.

And there’s a more significant issue with this.

As soon as you mix in other chemicals and synthetic materials, you don’t have raw latex anymore. And it is a lot more common in balloon production than companies claim. 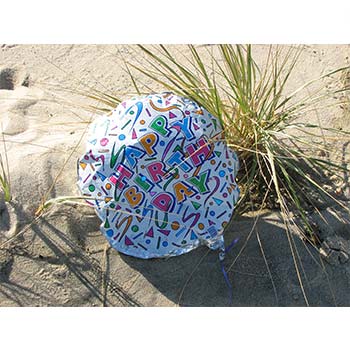 The whole concept of balloons being environmentally friendly is complete greenwashing,

That latex you see in balloons is far from being natural by the time it gets to you. It contains dyes, chemicals, and plasticizers that make it far from compostable or recyclable.

Next, let’s take a closer look at decomposition to show you that balloons are indeed not environmentally friendly.

How Long Do Biodegradable Balloons Take To Decompose?

Before we get to some real-life test results, let’s start with a simple definition and explanation.

What Makes Something Compostable?

Obviously, for something to be compostable, it has to biodegrade through natural processes. But it also has to happen within a specific timeframe. And fortunately, there is an industrial standard that covers this.

This standard says that it would have to disintegrate within 12 weeks and not be distinguishable from the surrounding soil.

I’ll admit it, 12 weeks sounds a bit optimistic, so I chose two experiments that go well beyond that time frame.

Test Conducted by the Institute for Marine and Antarctic Studies, University of Tasmania

The setup of the test conducted by Morgan Gilmour and Jennifer Lavers was simple and straightforward. [2] The experiment added a few colorful latex balloons to an industrial compost heap and monitored the progress over 16 weeks.

The results were far from eco-friendly.

After 16 weeks in an industrial compost heap, we unearthed blue and white balloons and found them totally unscathed. The knots we spent hours painstakingly tying by hand more than four months ago were still attached, and sparkly blue balloons still glinted in the sun.

There was no change in the look or feel of these balloons. And that would provide more than enough time for wildlife to pick it up. 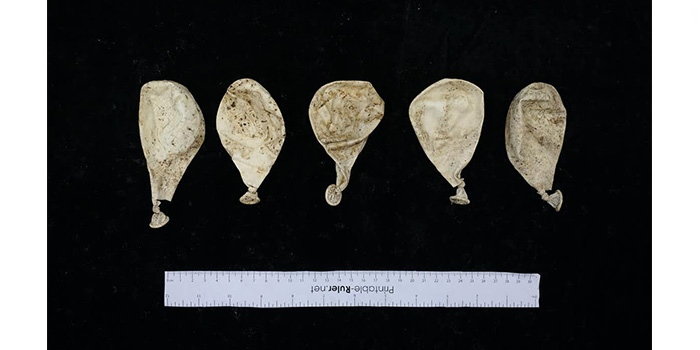 The University of Tasmania balloons after 16 weeks in the compost heap. (Source: Jesse Benjamin)

I love the name of this non-profit organization, but the test they ran is even more impressive. [3]

Interestingly, the authors here refer to oak leaves taking up to 4 years to degrade fully. And their helium balloons test gave a fascinating insight.

They picked up two latex balloons in December 2011 and then put them directly onto soil in a garden. The researchers chose this approach as it’s difficult to argue that every balloon release ends up perfectly placed into a dedicated compost heap.

So, what were the results?

5 years later, the balloons were still recognizable and had not degraded anywhere near enough to be classified as decomposed. 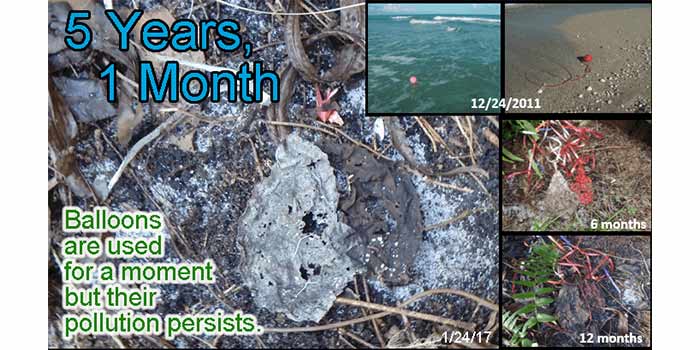 What Can Be Used Instead Of Balloons?

Now, many people hear this, and they think that families and kids need some bit of fun at big events.

And I totally agree.

But I wonder how many people, especially kids, would still want to use balloons if they fully understood how much damage they do to animals.

So I’ve come up with a list of ideas that kids can use instead of balloons.

You can buy these or even make them yourself. I have seen several schools that used this idea as an art project to use up scrap materials that were heading for the recycling bin.

It’s amazing what even a few dozen of these products look like outside a classroom window. But imagine the effect hundreds or thousands of them could have at larger events.

The great thing is that the entertainment isn’t over in a matter of seconds, which is what happens with helium balloons. 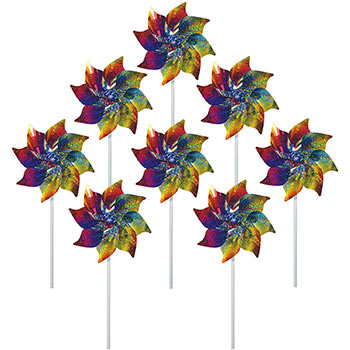 These are best for events where you want to brighten up the sky. They can be attached to fences, traffic lights, and in between buildings to make a wonderfully colorful display that flutters in the wind.

And the best thing about these products is that you can use them again for many years to come. 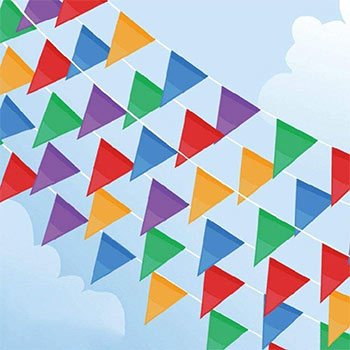 I know how much fun kids get out of balloons. But if you’ve ever seen a group of kids playing with bubbles coming out of a bubble machine, then it beats a balloon release hands down.

Kids will remain entertained for hours, and if you use safe, eco-friendly detergent, then there wouldn’t be any harm to animals either. 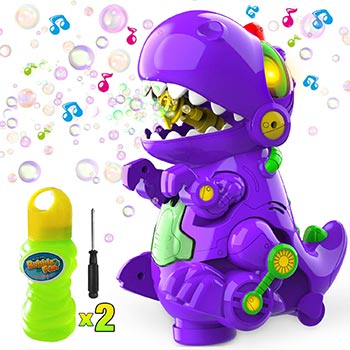 Older kids might not get as much entertainment out of balloons, but if there’s a little bit of wind, then try floating some brightly colored kites.

If you get enough of them in the air, it can become a much more impressive display than a few seconds of latex balloons floating away. 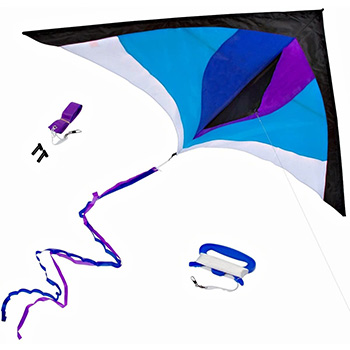 I saw this beautiful idea on a trip to Portugal, where some towns have created shade in pedestrian areas by tying up hundreds of sun umbrellas in loads of different colors.

It’s incredibly effective to look at, but also provides some cooling sun protection as well.

Whether you’re planning a small birthday party or major event, these ideas won’t break the bank and could work out a lot cheaper than filling balloons with helium.

And, of course, you won’t be damaging the environment. 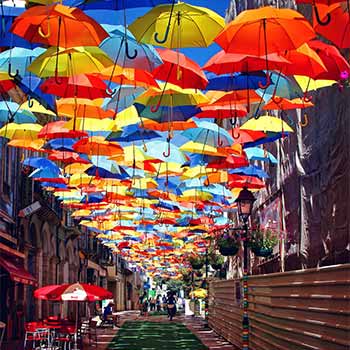 You can make these out of recycled party streamers. Similar to the pinwheels above, I’ve seen kids in schoolyards running around with them after making them from leftover artwork.

If you do buy them, then just make sure they are made out of biodegradable paper rather than plastic that could end up causing problems. 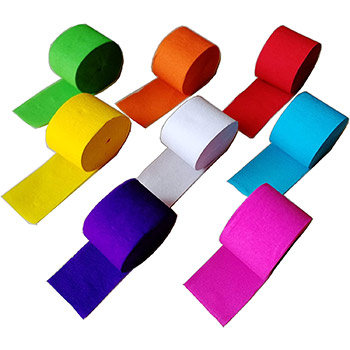 I’ve seen some communities plan out the types of trees and flowers they plant to be in full bloom at the time of regular festivities.

The effect of cherry blossoms or a sea of daffodils and lavender can be so much more amazing to look at than anything synthetic.

For me, I like to get this seed mix of annual, biennial, and perennial flowers and herbs from Botanical Interests so I'll always have gorgeous flowers in my garden whenever we decide to throw a party for friends and family any time of the year. 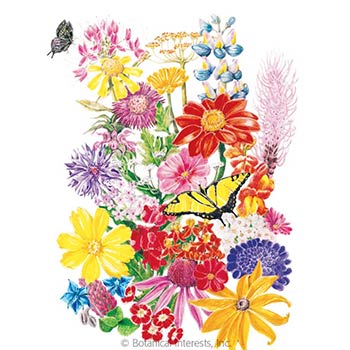 No, mylar balloons don’t decompose. Mylar is a synthetic product that will never biodegrade. Unfortunately, it’s a material that you’ll find in too many household items and many companies still make balloons with this pollutant.

Are there biodegradable water balloons?

No, there are no biodegradable water balloons because all balloons are either made of mylar or a highly processed form of latex. While you can technically compost latex, the way companies mix it with chemicals and synthetic plastics makes it a substance that won’t easily break down.

No, foil balloons are not biodegradable. They are made from a synthetic type of nylon that makes them air and watertight. It’s also not possible to recycle them as you cannot easily extract the materials that make them shiny.

How many animals are killed by balloons?

Over 100,000 marine mammals are killed each year by balloons according to some estimates published by the NY Times. What’s shocking is that 5% of dead sea turtles had latex balloons in their stomach, leading to starvation.

Are balloons plastic or rubber?

Balloons are made of rubber, but it’s important to also note that they often contain plasticizers. These synthetic and chemical compounds make natural rubber and latex softer and more durable, but they also make the balloons less biodegradable.

Don’t believe the balloon industry: there is no such thing as a biodegradable balloon.

I have shown you the results of two excellent tests that prove that a helium latex balloon won’t just degrade. They are very harmful to the environment, and millions of animals suffer and die every year because of them.

So, let’s put an end to the massive use of balloons and switch to some of the great alternatives I have recommended above.